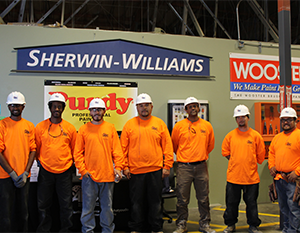 Their task wasn’t an easy one. Our competitors had to build a finished project on the spot. They didn’t get to study the blueprints or create a plan of attack. They simply had time to hear a few inspirational words from their instructors and ABC NorCal President & CEO, Michele Daugherty, don their protective gear and walk out to their stations.

At the sound of the bullhorn, they sprang into action, putting all of their skills and knowledge to test for a grueling six hours.

They couldn’t talk to each other or ask questions. There were numerous distractions, including friends, family, supporters and judges wandering by and stopping to watch them work. And yet our competitors persevered.

It wasn’t long before projects started to take shape. A framed building seemed to magically appear on the wooden platforms at the carpentry stations. The electrical station panels seemed to grow switches, conduit and wires. You could feel everyone’s excitement building as the final countdown drew closer and closer.

One hour left became thirty minutes. Thirty minutes became ten. And then as quick as it started, it was over. Family members looked on proudly and applauded as Miguel Villa, Nathan Juarez and Varun Ram were announced as the day’s winners. Cheers erupted when it was revealed that Nathan and Varun will representing us at the ABC National Craft Championships (NCC) in Ft. Lauderdale, Florida in 2016.

It was an incredible day; one that wouldn’t have been possible without the generosity of our sponsors. We are grateful to them and our judges Richard Brown, Michael Grist, Norm Hattich, Josh Hellinger and Tyler Stauts.

And to the magnificent seven who willingly took on this amazing challenge: Gentlemen, you did us proud! As our Unilateral Apprenticeship Committee Co-Chair, Dave Dobson, said, “This event represents the pinnacle of craft training and you delivered!”

Be sure to check out the photos on Flickr and follow us on Facebook for updates about Nathan and Varun’s journey to Ft. Lauderdale and the 2016 NCC.